With the world’s first T10 cricket league all set to kick off in Sharjah from December 14, here is what you need to know about the first ever edition of the League as six teams will participate in the competition for the ultimate prize in the 10-over format of the game.

As evident by its name, the revolutionary new format will see the allotted overs for each team reduced to 10, with the entire match to be completed in just 90 minutes. But the invention — which will feature some of world cricket’s biggest stars including Shahid Afridi, Kumar Sangakkara, Eoin Morgan, Virender Sehwag, and Shakib al Hasan — has not gone down well with some PSL franchises, who feel the mini league has the potential of damaging their flagship T20 league’s brand.

Somehow, the decision is likely to slash PCB’s own successful Pakistan Super League’s worth.

Interestingly, India has not sent even a single player to the league in which, five out of six teams are owned by Indian nationals while one has an Afghan owner.

Cricket observers equate this decision to a suicide mission by PCB for PSL because with the inclusion of Pakistan’s 1st tier players, the worth of T-10 League has increased manifold and it would become a mini PSL ahead of the main PSL. 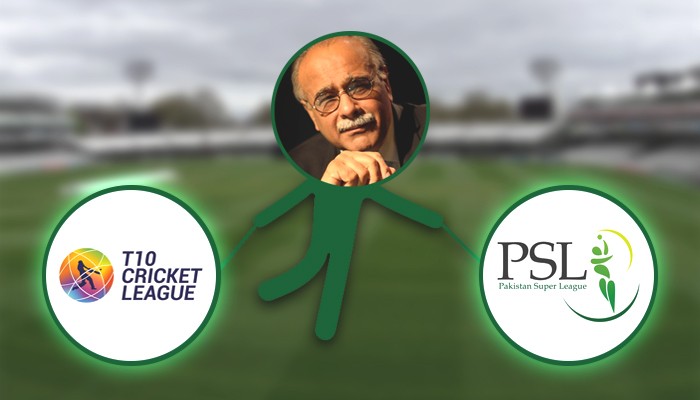 In the stir of this 90-minute league many Pakistani franchises have expressed concerns over the League in Sharjah over fears of its possible detrimental impact on the PSL.

Chairman PCB, Najam Sethi has already shown his full support for T10 earlier. He feels if all stakeholders are getting benefits then PCB would support the league wholeheartedly.

On the other hand PCB chairman termed T10 league issue as a fight between two media organisations, as one PSL franchise is media partners with Geo GROUP and another PSL franchise is with ARY GROUP, ARY has bought a stake in T-10 League. The matter of concern here is, as PSL is finally inching towards becoming a brand, the decision of PCB at this time to Support T10 league ahead of PSL will certainly harm the flagship show.

In this context some of the former cricketers of Pakistan have also shown their reservations over Pakistan Cricket Board’s (PCB) decision to release some of its top players for T-10 league.

Former ICC president and Test captain Zaheer Abbas, voiced his doubts over the board’s wisdom in giving a green light to its contracted players to play the league.

Recently PCB has released its press release in which they answered some reservations of a Media group (Geo), which are as follows:

“The PCB has taken a fee of US $400,000/ from the league to allow only ten of its centrally contracted players to participate in it. This money is being spent on game development in the country”.

“Game Development”, the term seems ridiculous as most of us are aware of the detrimental state of our domestic cricket structure from the past 20 years.

In my opinion being a cricket purist, 10 overs per game is total disrespect of cricket as a game. With this T10 league where a 90 minute game is set to be played conforming to the fast paced lifestyle of the millenials, where exactly are you taking cricket? Are you going to come up with five-overs cricket next?

Ten overs is easy, extremely convenient money. What’s the point of bothering 11 players from each side in such a format? Six or seven players are enough. Honestly, I can’t see any future for this format.

Their are a lot more concerns that I and many more who are keeping a close eye on this amusing development share and Najam Sethi’s strong advocacy of the league seem like a worrying sign.

On a side note?

What happened to the fixers from the previous edition of PSL? Was their a possible method to the evident madness or were the players alone to be blamed wholly and solely for their deed?