Shares fell down at PSX as KSE-100 sinks 2,200 points on coronavirus fright

KARACHI: The Pakistan Stock Exchange was reeling again on Monday with the benchmark KSE-100 index down over 2,200 points, or 6.14 per cent, at 1:39pm.

Trading was halted around 10:13am today – marking the the fourth time such a measure was enforced in two weeks – when the large cap KSE-30 index crashed 5.53 per cent.

According to bourse rules, if the KSE-30 index moves over 4pc or more in any direction for a period of five minutes, trading is halted for 45 minutes. 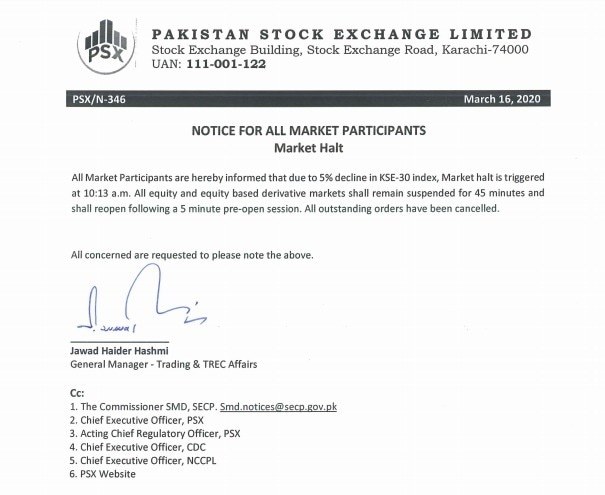 Deputy Head of Research at AKD Securities, Ali Asghar Poonwala said last week’s negative sentiment was continuing into this week, with investors panicking as Pakistan doubled its count of coronavirus patients over the weekend while trade disruptions and uncertainty resulting from the virus outbreak remain world over.

“In a clear bear phase, the benchmark index now stands down 16 per cent for the year, shedding 10pc of its value, since Pakistan started reporting its first cases of the novel coronavirus on February 26.” 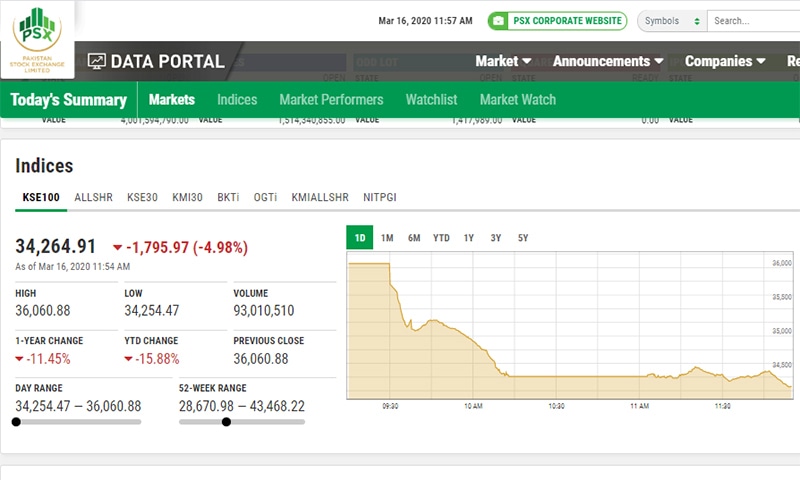 He maintained that the raising of circuit breakers to 7.5pc starting today also played a part in swaying markets as the wider gap allowed for individual intra-day stock moves opens room for greater deviations (from 5pc previously) in large-cap stocks to sway the index.

Meanwhile, Head of Foreign Institutional Sales at Next Capital Limited Faizan Munshey added that KSE-100 index followed the trend in world markets, for which coronavirus was a major reason.

Stock markets and the dollar were roiled on Monday after the Federal Reserve slashed interest rates in an emergency move and its major peers offered cheap US dollars to ease a ruinous logjam in global lending markets.

Data out of China also underscored just how much economic damage the disease had already done to the world’s second-largest economy, with official numbers showing the worst drops in activity on record. Industrial output plunged 13.5pc and retail sales 20.5pc.

MSCI’s index of Asia-Pacific shares outside Japan slid 3.1pc to lows not seen since early 2017, while the Nikkei eased a relatively mild 0.14pc.

Shanghai blue chips fell 1.4pc even as China’s central bank surprised with a fresh round of liquidity injections into the financial system.

Southeast Asian stock markets tumbled on Monday, with Malaysia hitting a near ten-year low, as drastic policy measures by the US Federal Reserve did little to soothe investor nerves over the lightning spread of the coronavirus.

“Ironically, markets might have perceived the Fed’s response as panic, feeding into its own fears,” Vishnu Varathan, a senior economist at Mizuho Bank, said in a note.

Malaysia’s benchmark index shed 3.4pc to hit a near 10-year low, led by losses in the financial sector. Malayan Banking Bhd hit a near three-and-a-half-year low.

Philippine shares recouped some losses after losing as much as 7.6pc in early trade, but stayed firmly in the red.

Singapore shares dropped 3.4pc, and were set for a fourth straight session of losses, while Indonesian stocks dropped 4pc, ahead of February trade data expected later in the day.