Web Desk: The Election Commission of Pakistan (ECP) has released results of all 270 National Assembly (NA) seats that were polled on July 25 across the country.

According to the results, the Pakistan Tehreek-e-Insaf (PTI) leads the NA tally with 116 seats. Trailing is the Pakistan Muslim League-Nawaz (PML-N) with 64 seats and Pakistan Peoples Party (PPP) with 43 seats.

According to ECP, the total number of votes polled was 52.8 million. PTI got the popular vote, receiving 16.85 million votes while PMLN, its biggest competitor, got 12.89 million votes. 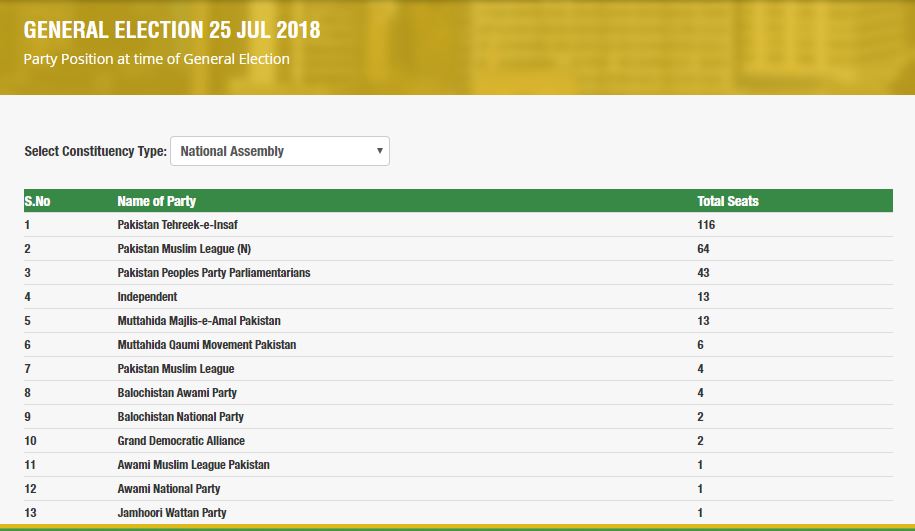 Independents elected to the provincial assembly stand at 29.

In the provincial assembly, only the result of PP-1 (Attock) is awaited as in the total house of 297, polling wasn’t held on PP-87 and PP-103 due to the death of candidates.

In the Sindh Assembly’s 129 seats, the PPP continued its majority in the house with 76 seats while the PTI managed to get 23, MQM-P 16 and GDA 11 seats.

Tehreek-e-Labbaik Pakistan won two seats while the MMA bagged one seat from the province.

The result for the provincial assembly, with 130 seats in total, is complete as polling in PS-87 (Malir) was postponed after the death of a candidate.

For the Khyber Pakhtunkhwa Assembly, the ECP declared results of 96 out of 97 seats where the PTI has managed a majority by bagging 65 seats.

The MMA has won 10 seats while the ANP got six and PML-N five seats.

The PPP only won four seats in the province while six independents also made it to the provincial assembly.

Polling in two constituencies — PK-78 and PK-99 — was postponed after the death of candidates in terrorist attacks.

The ECP has declared results for all 50 Balochistan Assembly seats that were up for grabs.

The newly-formed Balochistan Awami Party bagged 15 seats, after which the MMA stands at second place with nine seats.

The BNP won six seats, the PTI won four seats, whereas the BNP-Awami and ANP got three seats each.

A total of five candidates have also been elected as independents.

Droves of voters: Pakistan votes from Karachi to Khyber in pictures