Turkish series Dirilis: Ertugrul has gained popularity overnight in Pakistan. However, it has also triggered a debate on social media in Pakistan about whether or not foreign content will harm the local industry or no. A few celebrities extolled the series as an insightful peek into Islamic history while others called it a “threat to local culture”.

The big-budget series, that documents the valour of Muslim Oghuz Turks fighting and invading the Mongols, Christians and the Knights Templars in Anatolia, is an incredible depiction of the era preceding the Ottoman Empire.

Originally produced by the Turkish state-owned media company TRT in collaboration with a private company, the historic drama was later dubbed into various languages and was streamed online around the world.

Billed as Turkish ‘Game of Thrones’, Dirilis: Ertugrul flared up a debate on social media, particularly on Twitter, where many users were seen defending Prime Minster’s Imran Khan’s decision to have the series aired during the lockdown as an effective strategy to keep people indoors.

In this regard, Pakistani celebrities have also picked sides where a few endorsed the series for the incredible craft and impressive cast line up while others have voiced concerns that the series might instigate an identity crisis in Pakistan.

Recently, social activist-turned-politician Jibran Nasir voiced concerns on the broadcast of the first season of the blockbuster serial on PTV, referring to it as a source for triggering an identity crisis and sense of cultural invasion among Pakistanis.

Taking to Twitter, Jibran wrote: “We’ve many beautiful cultures in Pak[istan] but many still face a identity crisis which is also seen in our diaspora.”

He went on to add, “Being ourselves often causes “Goras” to confuse us as Indians due to our similarities, so we mimicked Arabs tracing our roots to Bin Qasim. Now we’re trying being Turks.”

We've many beautiful cultures in Pak but many still face a identity crisis which is also seen in our diaspora. Being ourselves often causes "Goras" to confuse us as Indians due to our similarities so we mimicked Arabs tracing our roots to Bin Qasim. Now we're trying being Turks

Soon after his tweet, other celebrities like Haroon Shahid, Bilal Ashraf and Osman Khalid Butt jumped in to counter his stance while appreciating the flawless performance of the actors in the series.

ERTUGRUL is brilliant. Great story and awesome production. Happy to see it was introduced to the local audiences. Film/ Drama is a form of art and needs to be appreciated regardless of where it was made 😊 #Ertugrulgazi 👍 What do you guys think?

Of course, I'd love it if our national television uses the revenue generated from this series to create our own original content – shows that can rival Ertugrul in narrative if not in scale, and showcase our own historical events.

I don’t know what the fuss is all abt? At the end of the day lets accept Dirilis #Ertugrul for wht it is; an educational drama series which has historical significance & gr8 moral lessons.I think Engin Altan Düzyatan is pretty hot. A bit like Leonardo Di Caprio no?#crushupdated♥

Pakistani film actor Shaan Shahid opposed the broadcast of the serial in Pakistan, saying that the Turkish series is sabotaging Pakistani content which already thrives for adequate platforms and recognition.

Other actors like Yasir Hussain,  Mansha Pasha and Reema Khan joined Shahid in raising their voice for Pakistani production houses which are already suffering from a loss due to coronavirus lockdown and now, have to deal with powerful foreign content. 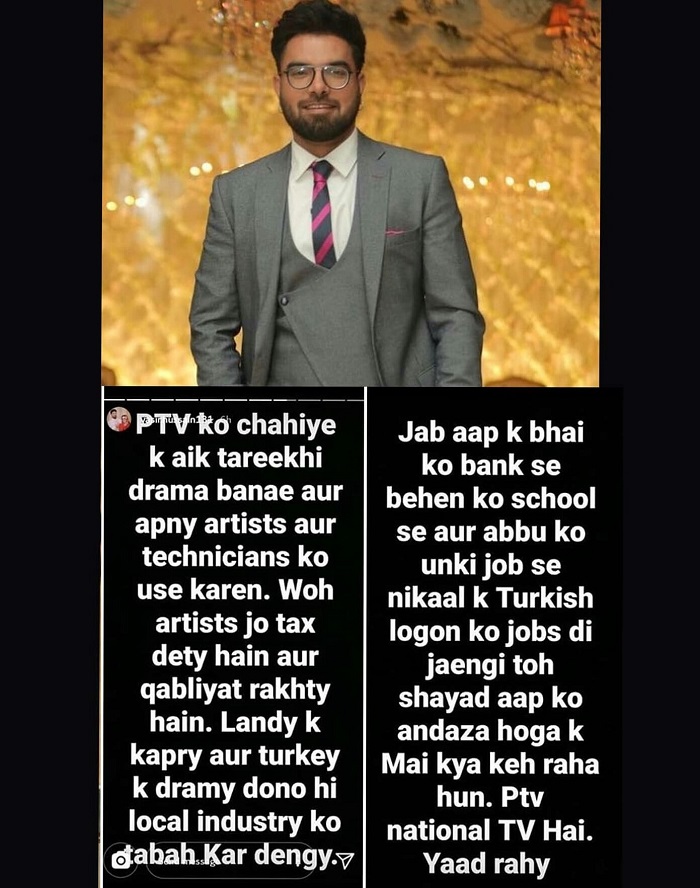 Those lambasting Yasir Hussain and calling the work in Pakistan "sub-par" seem to have forgotten what it takes to make content here. Even without any subsidy from the govt, even if u manage to gather ur own funds, ur projects can still bet banned or pulled off after clearance