Turkish actress Esra Bilgic has thanked her Pakistani fans for their love and said that she was waiting excitedly to meet them in Pakistan.

Esra essays the lead role of Halime Sultan, the wife of Ertugrul in the historic drama Diriliş: Ertuğrul or Ertugrul Ghazi that has won the hearts of millions of Pakistani fans with her outstanding performance.

She turned to Instagram and shared an adorable photo of her on Saturday and Pakistani fans showered love on the endearing post with their appreciatory messages in the comments.

Responding to one of the comments, Esra wrote, “I would like to say thank you will all my heart for your precious compliments. Your support makes me really happy.” 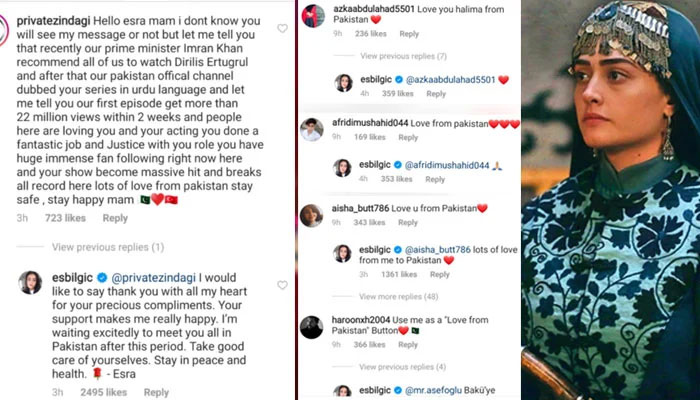 She went on to say, “I’m waiting excitedly to meet you all in Pakistan after this period. Take good care of yourselves. Stay in peace and health.”

To another comment, She said, “lots of love from me to Pakistan.”

Turkish drama series Ertuğrul has swept over Pakistan with its Urdu-dubbed version airing on small screens and its episodes are trending on YouTube every day.

The drama series started airing on the state-run Pakistan Television (PTV) on the directives of Prime Minister Imran Khan in Ramadan.