ISLAMABAD: Domestic flights are slated to resume starting May 16 from five major airports in the country, according to a notice from the Pakistan Civil Aviation Authority (PCAA), days after Prime Minister Imran Khan announced a relaxation in the lockdown to contain the coronavirus. 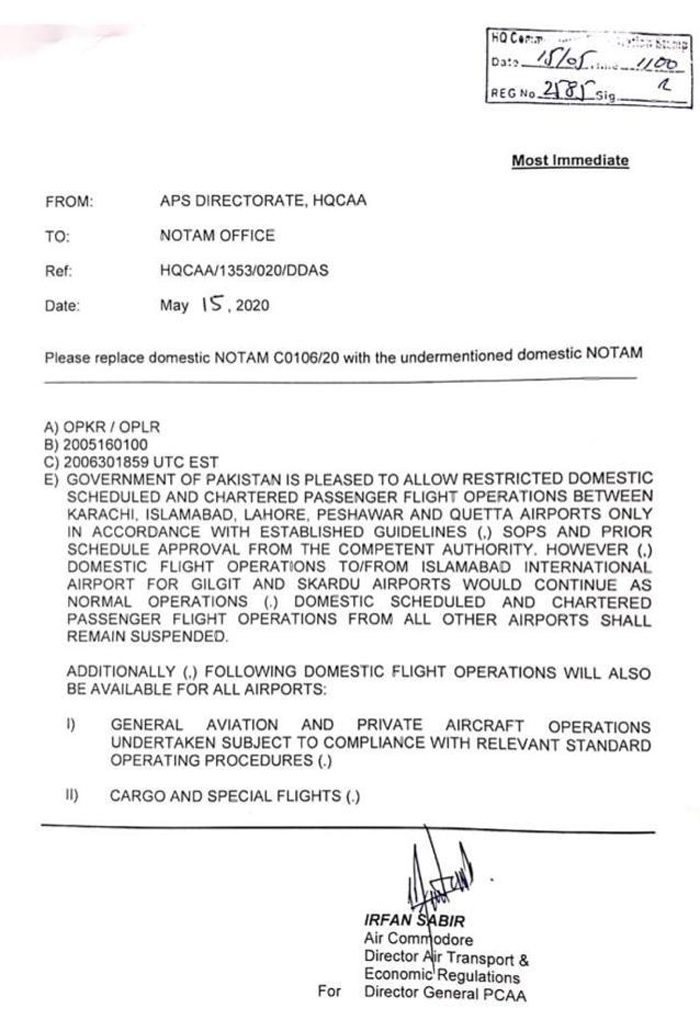 Sarwar said social distancing would be followed based on the seats in the airplane and capacity to fill 50% of the seats would be maintained. “Passengers will be provided the opportunity to travel safely,” he added.

The move came “in view of the difficulties being faced by passengers in travelling between major cities in Pakistan”, the PCAA said on Twitter.

The minister, it added, noted that the “Aviation Division has prepared very strict SOPs ensuring disinfection, social distancing and safety for the airline crew and passengers”.

3/9 It is highlighted that the SOPs for domestic passengers and chartered flight operation require disinfection of the aircraft prior to boarding, at least one vacant seat between the passengers, compulsory wearing of masks and use of hand sanitizer.

Apart from social distancing, other measures include “disinfection of the aircraft prior to boarding, at least one vacant seat between the passengers, compulsory wearing of masks and use of hand sanitizer”. Furthermore, no food or beverages would be allowed.

4/9 No food and beverages will be allowed during domestic flight. Airlines are required to maintain emergency PPE in every aircraft to deal with any health emergency during flight.

Passengers would be required to fill health declaration forms before boarding the airplane and subjected to thermal scanning on entry and exit into and from a city. All luggage would be disinfected and no meet and greet would be allowed at the airport.

5/9 Every passenger will be required to fill a health declaration form prior to boarding the aircraft, which include identification of the passenger, brief travel history during past two weeks, current health state and an undertaking to comply with the SOPs.

Drivers were advised to stay inside their respective vehicles in the parking lot.

A spokesperson for the PCAA said domestic flights would be operated by the Pakistan International Airlines (PIA) and one private company. The national carrier’s administration said tickets sales may start as early as the evening today.

However, sources informed media that certain airlines have said they were not ready to resume domestic flight operations.

Earlier in the day, Pakistan extended its ban on the international flight operations until May 31.

As per the decision of the GoP, the suspension of International flight operations as effected earlier has been extended upto Sunday, May 31, 2020 at 2359 hours PST. Remaining provisions as applicable to the suspension of Int flights reflected in previous orders remain unchanged.

“Remaining provisions as applicable to the suspension of Int flights reflected in previous orders remain unchanged,” the PCAA said on Twitter.

The aviation regulatory authority had previously announced an extension in domestic flight operations till May 10.