A first information report (FIR) has been registered against former prime minister Nawaz Sharif pertaining to criminal conspiracy for the “provocative speeches” he made in London to “defame Pakistan’s institutions”, it emerged on Monday.

The First Information Report (FIR) registered against Nawaz on October 1 was lodged by a citizen in the Shahdra Police Station’s jurisdiction. The case was registered under the provisions of the Pakistan Penal Code for criminal conspiracy against the PML-N chief and other leaders. 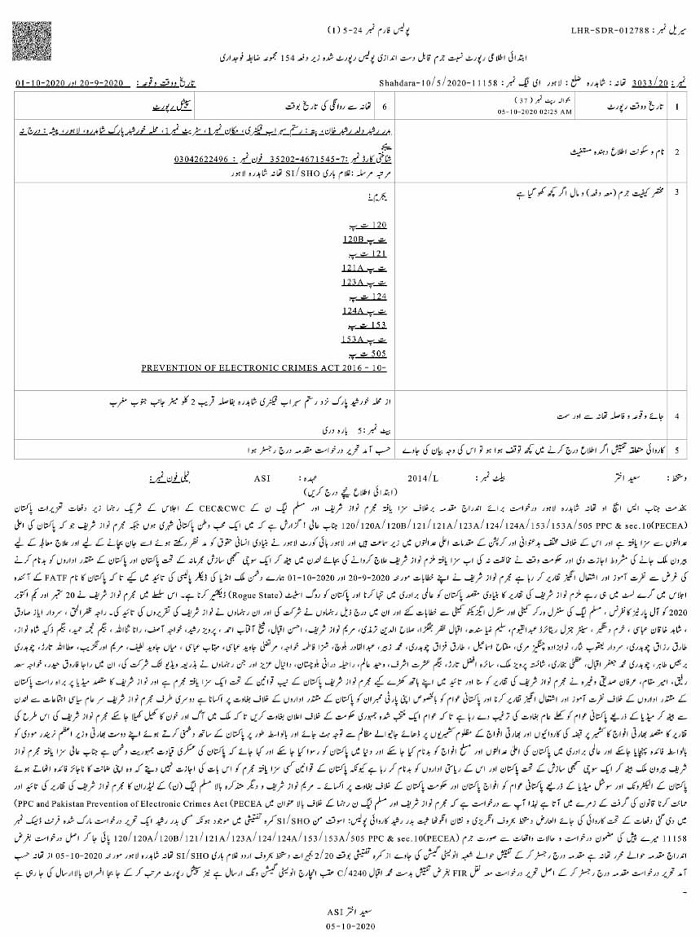 The FIR alleges that the former prime minister, in his speeches, supported the policies of India, and claimed that Nawaz wanted to give the impression that Pakistan will be listed in the Financial Action Task Force’s (FATF) grey list in its upcoming meeting.

The citizen in the FIR claimed that Nawaz, in his speeches, wanted to divert the attention of Indian forces’ atrocities in occupied Kashmir and India’s occupation of the territory.

Nawaz on Thursday called out the incumbent government for what he termed its “dual standards of accountability”, saying that he can “no longer remain quiet” on the matter.

He was addressing a PML-N central working committee meeting via a video link from London.

“Nawaz Sharif is not made of the kind of stuff that can stand remaining quiet on dual standards of accountability,” he said, adding that “no one should try to silence him”.

He said that although Prime Minister Imran Khan “is to blame” for the country’s current state, “it is those who brought him into power who are truly responsible”.

“They will have to answer,” Nawaz had said.

As he began his address, he spoke of how it had been a long time since such an address had taken place. “I am addressing you all after a long time. And in these two-and-a-half years we have all endured much.”

“But it is with God’s grace we are seeing each other now,” Nawaz said.

“When I look at the state the country is in, it saddens me deeply,” the former prime minister said. “We were on such a great path to progress and look at where we are now.”

Nawaz said he sees a world of a difference between the Pakistan of a few years ago and the one before us now. “I do not understand why this has happened.”