Nausheen Javed Amjad was on Saturday removed as chairperson of the Federal Board of Revenue (FBR), with Muhammad Javed Ghani appointed in her stead.

Ghani’s appointment has been approved by the Federal Cabinet.

According to a notification issued by the Establishment Division today: “The Federal Government has been pleased to assign the additional charge of the post of Chairman, Federal Board of Revenue (FBR), to Mr Muhammad Javed Ghani.” 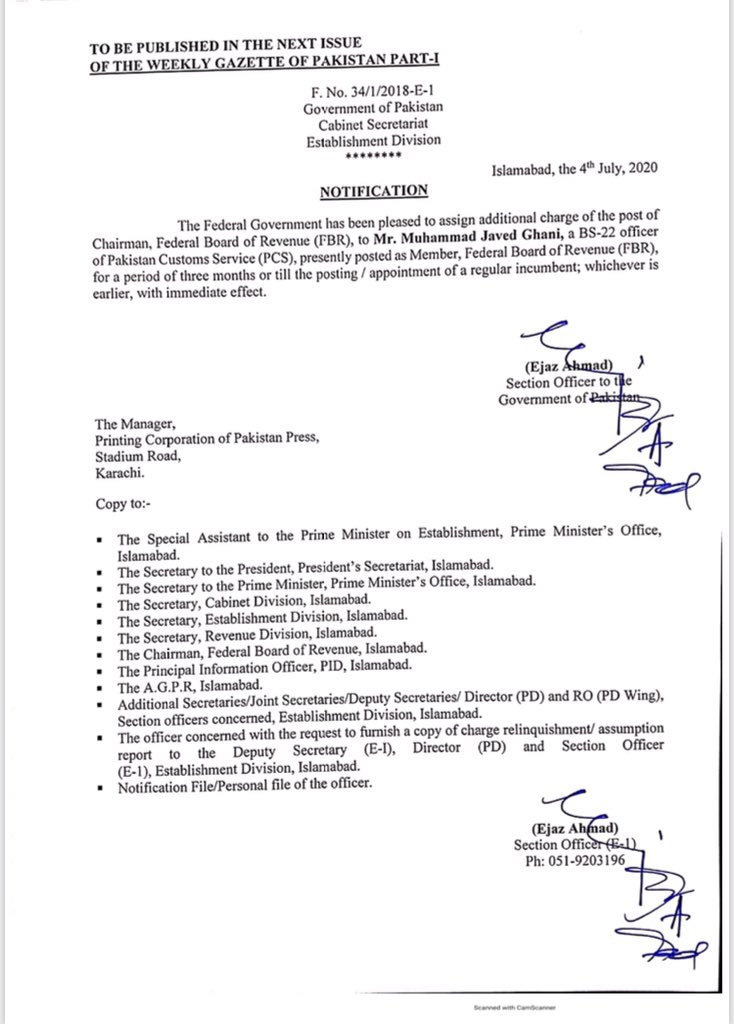 The notice observes that Ghani is a BS-22 officer currently posted as a member of the FBR.

His appointment has been made for a period of three months “or till the posting of a regular incumbent, whichever is earlier”.

Amjad had been appointed FBR chairperson in the absence of the former FBR chief Shabbar Zaidi, in April 2020.

Earlier, in January, Zaidi had gone on indefinite leave citing health issues. Zaidi had in February rejected speculation about his resignation, saying he had been unable to perform his duties due to ill health.

The federal cabinet had subsequently approved the appointment of Amjad as the FBR chief after circulating a summary in this regard. Zaidi was simultaneously removed from his position as honorary chief of the revenue body.

An institution beset by troubles

The new appointment marks the fourth time the top tax authority has seen a change in leadership since PTI came into power.

The institution itself has also been beset by troubles, chief of which has been a decline in tax collection.

The FBR’s performance was not much encouraging during fiscal year 2018-19 as the apex tax authority posted negative growth the first time in the past half century. It collected Rs3.8 trillion in 2018-19 and failed to reach numbers of the preceding year.

The collection during the outgoing year’s last three months, in particular, witnessed a significant decline due to the adverse impact of the COVID-19 lockdown and it registered 31% year-on-year decline in May.

The FBR’s offices were subsequently given a slashed target of Rs415.5 billion for June, whereas it had collected Rs518 billion in June last year.

June is an important month every year due to the closing of the fiscal year and efforts are accelerated to achieve the revenue collection target. Unlike past years, this year the tax offices were faced with multiple issues, including pandemic panic, lockdown and shortage of staff.

So there was much relief at the end of the outgoing fiscal year 2019-20 when it was reported that the tax collection was Rs50 billion higher than the target that was revised owing to the coronavirus pandemic.

Pakistan “achieved its revised tax collection target for this year”, an FBR spokesperson said, noting that the amount totalled Rs3.957 trillion as opposed to the goal of Rs3.907 trillion.

The spokesperson explained that the tax collection for June was Rs13 billion higher that the target of Rs398 billion, meaning it ended up receiving Rs411 billion.

The spokesperson also noted that the FBR achieved a gross revenue of Rs40 trillion — the first time in its history.