The energy ministry on Friday dismissed K-Electric’s (KE) claims attributing prolonged power outages in Karachi to a shortage of furnace oil in the market, saying the power utility’s system constraints were a major hurdle in resolving the issue.

It is unfortunate to note that KE didn’t invest in upgrading their systems due to which it is facing difficulties at a time of peak demand, a spokesperson for the energy ministry said in a statement.

“The federal government is ready to extend all available support for the provision of uninterrupted power supply to the residents of Karachi,” it said.

On Thursday, the power utility had said that peak demand had crossed 3,450 megawatt because of the hot and humid weather being experienced by the city.

“Furnace oil is not available in the market to the level required, resulting in up to 800 mt shortfall daily. This has been in the news and the government is taking action by allowing imports.

“Also, a reduction of 50 mmcfd in regasified liquefied natural gas (RLNG) by the Sui Southern Gas Company has further added to the challenge,” it had said.

KE had added that the government had decided to import furnace oil and the situation was “likely to normalise” in the coming days.

In a statement issued today, the energy ministry said the federal government was providing 800MW of electricity to KE and was ready to provide an additional 500MW.

“KE system physical constraints are a major hurdle in taking additional electricity. It clearly indicates that system upgradation has not taken place at the appropriate level and with appropriate investment.”

The statement added that the federal cabinet, keeping in view the general welfare of the people living in the metropolis, had approved the provision of an additional 1,100MW from the national grid.

“However, KE’s system is not able to absorb the additional electricity at present and upgradation will go on until 2022-2023 to fully take the additional supply.”

It added that liquefied natural gas (LNG) was available, but only a limited amount was being taken by the power utility due to Article 158 of the Constitution.

The statement added that the Petroleum Division has made arrangements for supplying 80 per cent of Pakistan’s residual furnace oil (RFO) production to KE to run its power plants.

“In addition, the federal government has also made arrangements for supplying 30,000 tons of RFO from storage […] to immediately fulfill KE’s requirements.”

The spokesperson said that the federal cabinet had also allowed Pakistan State Oil to float a tender for purchasing RFO for the power utility, adding that it had also approved the allocation of 150 mmcfd of LNG for KE’s new plants.

“This clearly indicates that the federal government has gone out of its way to provide support to KE and the people of Karachi besides running industries and businesses,” it said.

Meanwhile, the National Electric Power Regulatory Authority (Nepra) on Friday took notice of various media reports regarding unscheduled load-shedding by all distribution companies (Discos) of up to 12 hours. 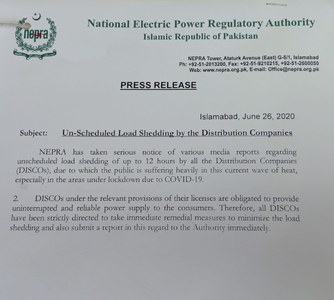 Noting that the power outages were causing the public to “suffer heavily” in the current heat and areas under lockdown due to the coronavirus, Nepra directed distribution companies to resolve all issues immediately.

“Discos, under the relevant provisions of their licences, are obligated to provide uninterrupted and reliable power supply to consumers. Therefore, all Discos have been strictly directed to take immediate remedial measures to minimise load-shedding and also submit a report in this regard to the authority immediately,” it said.