The NAB team and police officers instead headed to Shehbaz’s brother and former prime minister Nawaz Sharif’s home in Jati Umra in search of the PML-N president. They had earlier today reached the former Punjab chief minister’s residence in an attempt to arrest him.

Several party workers had also reached Shehbaz’s residence to protest against the NAB; meanwhile, barricades were set up in the area and media personnel was not being allowed to go near his residence.

A four-member team — including three women officers and led by NAB Deputy Director Chaudhry Muhammad Asghar — was at the site.

It was unclear what the aim of the NAB team’s visit to Shehbaz’s residence was. 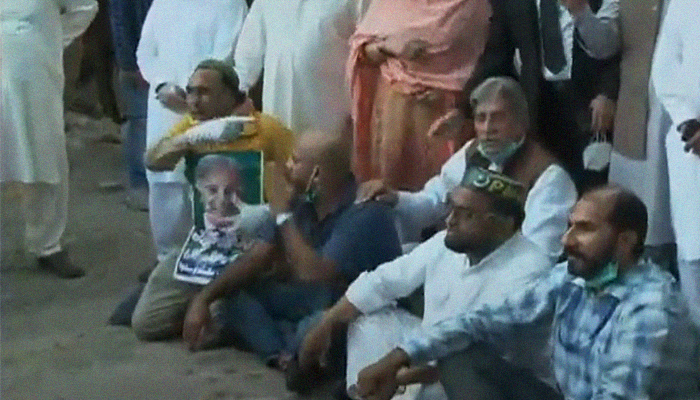 The PML-N president skipped a NAB hearing over a case of assets beyond means earlier today at 11 am. Instead, in his response to the anti-graft watchdog said its team could question him via Skype because he was old and did not wish to pose a risk to his health amid the coronavirus pandemic.

In the response, the PML-N president said the coronavirus cases were rising and the pandemic was nearing its peak. He added that some of the NAB’s officers had tested positive for the deadly respiratory illness as well.

Shehbaz said he was 69 years old and a cancer survivor; therefore, the NAB’s investigative team could question him via Skype.

‘Contempt of the court’

Speaking on the developments in Lahore’s Model Town, PML-N leader Rana Sanaullah said the actions of police and the NAB fell under “contempt of the court”.

Such behaviour was indicative of the “government’s confusion”, Sanaullah said.

“The whole nation is concerned over the coronavirus pandemic and locusts’ attack but the rulers are engaged in vindictive actions,” he said.

A high court has already scheduled a hearing for the case at 11am tomorrow, he added, noting that Shehbaz would appear for that hearing.

The PML-N president had not returned from London to appear in the NAB case, he noted, but had come to Pakistan on his brother Nawaz’s advice to help fight the coronavirus pandemic.

“I do not know where Shehbaz Sharif is,” Sanaullah stated, adding that it was strange why the NAB was in such a hurry.

Malik Ahmed Khan, another PML-N leader, said the anti-corruption body was showing “complete political revenge” and the government was doing so to fulfill its political goals.

“Shehbaz Sharif has always honoured the law and answered the NAB’s questions. The NAB’s actions lay bare the government’s intentions,” Khan said, adding that the anti-graft watchdog had been informed that Shehbaz and his team wished to respond to everything.

The PML-N leader further claimed the incumbent PTI-led government was engaging in such actions to hide its weaknesses in the upcoming budget.

The PML-N’s Marriyum Aurangzeb later reached Model Town and addressed the media, saying “this was a circus and drama of NAB-Niazi nexus”.

Aurangzeb said Shehbaz had to go to the NAB’s office earlier today and that he had yesterday submitted a petition in the Lahore High Court claiming the operations of NAB were “ill-intentioned and based on political revenge”.

“The entire nation is aware of the nefarious agendas of NAB-Niazi nexus. A divisional bench of the LHC has scheduled a hearing for the petition for tomorrow,” she said, adding that the PML-N president wrote to the anti-graft body about how its officers had tested positive for coronavirus and since he’s a cancer survivor, he would not make an appearance.

“The case on Sehhbaz — from Ganda Naala, Saaf Pani, Ashiana scheme, 56 Companies, Earthquake funds embezzlement — are false allegations. The entire drama since the past two-and-a-half years is in front of the Pakistani people.

“Despite all such allegations, Shehbaz continued to appear in front of the law and the NAB,” she said, alleging further that the authorities outside the PML-N president’s residence were beating party workers, including women.

She claimed that “rented spokespeople are staging dramas” and that “all this circus being carried out at [Prime Minister] Imran Khan sahab‘s orders is unconstitutional and illegal… It’s a contempt of the court”. 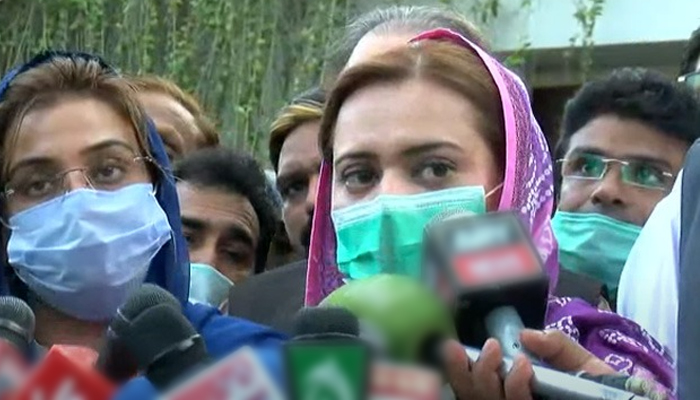 This is because the “incompetent, incapable, and thief prime minister does not have a plan of action”, she added.

“Shehbaz Sharif remained in the NAB’s custody for 133 days. What questions couldn’t be asked in those 133 days?”

Aurangzeb added that no corruption allegation against Shehbaz had been proven and that today’s development was a “purposeful attempt to divert attention from sugar crisis report and the government’s lack of strategy for coronavirus response”.

She said the party leadership and workers “will continue to fight these tactics and circuses”.

Addressing NAB Chairperson Justice (retd) Javed Iqbal, she said: “If NAB team is here to arrest Shehbaz, then the people of Pakistan will go to Bani Gala to arrest Imran Khan who stole Pakistani people’s sugar!”

The PML-N leader further noted that no arrests, summons or forensic had been carried out in accusations against the ruling PTI. “This arrest was staged [because there is a] hearing for tomorrow but the NAB had to stage this circus today.

“Their aim was ridicule and disrespect but it backfired!”