Pakistan ‘a good example’ for world to follow on coronavirus policies: UNGA president-elect

ISLAMABAD: United Nations General Assembly (UNGA) President-elect Volkan Bozkir said Pakistan is a “good example” for the world to follow when it comes to dealing with the coronavirus pandemic.

“Pakistan has been a good example to the world with its policies related to the global pandemic. It has performed better than any other country in dealing with global pandemic and I am happy to observe it also with my own eyes”, Bozkir said while addressing a joint press conference with Foreign Minister Shah Mahmood Qureshi on Monday.

“He is a well-known political figure around the world and has a clear vision for the region, for world peace and security, along with important issues like the world is dealing, such as climate change,” Bozkir added.

He added, “Shah Mahmood Qureshi is like a brother to me and is doing an excellent job. I would like to extend my condolences over the Balochistan blast [Chaman blast] to the people of Pakistan. My visit to this brotherly country is to recognise the longstanding brotherly relations Turkey and Pakistan have.”

Qureshi, while addressing the presser earlier, said he had raised the issue of human rights violations in Indian occupied Kashmir at the hands of the occupying forces in the region.

“The UNGA has deliberated on the lingering dispute three times in a year which is unprecedented and we are grateful for it,” Qureshi said. “Pakistan desires that the discussion on the issue is also held in the UNGA as it is the pulse of the world that highlights the views of the comity of nations.”

Qureshi said the two also discussed the situation in Afghanistan and the positive developments that have taken place in the Doha talks. He revealed that the two spoke about decision taken by the Loya jirga in Afghanistan regarding freeing 400 Taliban prisoners on Sunday.

Earlier, the UNGA president-elect called on PM Imran where the prime minister urged the United Nations to play its rightful role in addressing the grave situation in occupied Kashmir and ensuring that Kashmiris exercise their right to self-determination as promised by the relevant UNSC resolutions.

The prime minister highlighted the dire human rights and humanitarian situation in the valley since August 5 last year, as well as the ongoing gross and systematic violations of human rights in the occupied territory.

Qureshi in an earlier meeting with Bozkir had said Pakistan expects the United Nations General Assembly (UNGA) to play an effective role in the peaceful resolution of the Kashmir issue and put an end to the human rights violations in the valley.

Qureshi during the meeting apprised Bozkir about the ongoing human rights in occupied Kashmir in the wake of India’s unilateral step of changing the valley’s constitutional status, saying the extrajudicial killings of Kashmiris at the hands of the occupying forces, had become a norm in the valley.

He said the Kashmir issue was an internationally recognised dispute, also endorsed by the UN Secretary-General in his August 8, 2019 statement.

Speaking about the coronavirus pandemic, Qureshi said a combined joined effort is needed at an international level to fight the pandemic.

The two leaders also exchanged views about the efforts for peace and stability in the region, including the Afghan peace process.

Qureshi said Pakistan has been playing its reconciliatory role for peace in Afghanistan under a shared responsibility. He added that the intra-Afghan dialogue was imperative for durable peace and stability in the region.

Bozkir also planted a sapling at the office of the foreign ministry, a day after Pakistan kicked off its largest plantation drive in history. 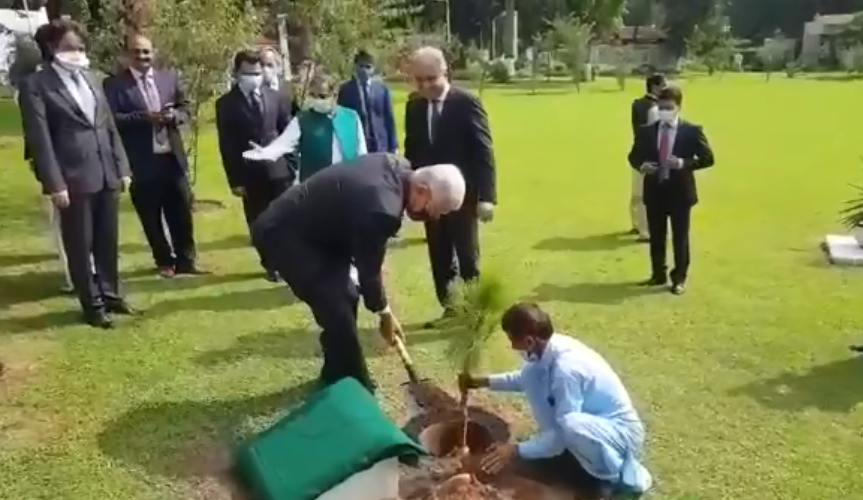 After the meeting, Shah Mahmood Qureshi and the UNGA President-elect will hold a joint press conference.

Bozkir will hold meetings with the top leaders of the country, including Prime Minister Imran Khan.

The agenda of the 75th session of the UN General Assembly will also be discussed in the meetings.

UNGA President-elect had arrived in Islamabad on Sunday for a two-day visit after it was postponed last month due to “technical flight problems”.

Pakistan has said it remains committed to supporting the role of the UNGA on questions relating to international peace and security; economic and social development; promotion and protection of human rights; peaceful settlement of international disputes; refraining from the threat of use of force; and developing friendly relations among nations based on the principle of equal rights and self-determination of peoples, as enshrined in the purposes and principles of the UN Charter.

Bozkir is the first-ever Turkish national to be elected to the Office of the President of the UNGA.

He will be leading a historic and unprecedented General Assembly Session as the UN commemorates the 75th anniversary of its establishment this year.