It is estimated that 97 people were aboard the plane, including 85 passengers and 12 members of the flight crew.

Bank of Punjab (BOP) President Zafar Masood is among multiple survivors. Masud has been taken to the hospital, where his brother is with him. He is said to be stable.

PIA emergency response desk has begun work and is gathering details from the families of the passengers who were on board the flight.

According to the Civil Aviation Authority, PIA flight PK-8303 from Lahore was about to land in Karachi when it crashed in the Jinnah Garden area near Model Colony in Malir. 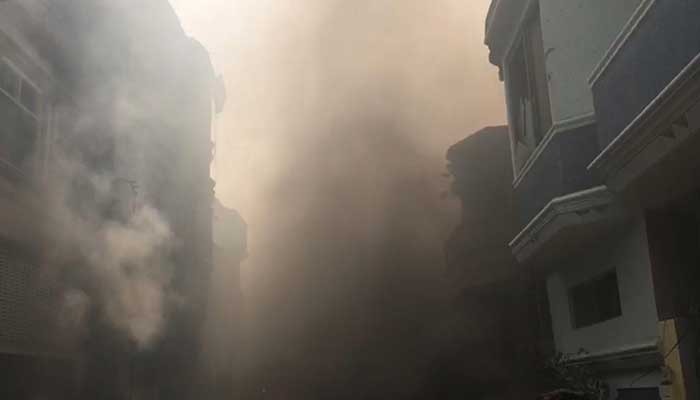 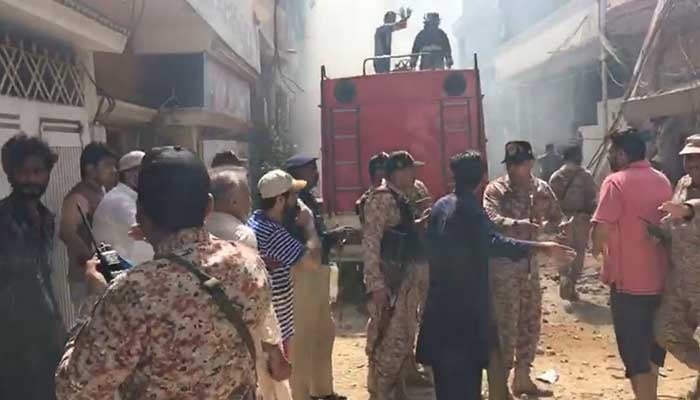 Jinnah Hospital has said that several injured have been brought to their facility. One of them was badly burned and has been shifted to the burn ward of the hospital.

Among the injured are women, men, and a seven-year-old boy.

They are said to be residents of the area where the crash took place.

PIA chief executive Air Marshal Arshad Malik said that the pilot, in his last words, had said that there was a technical fault with the aircraft. “The pilot was told that both runways were ready for him to land. However, the pilot decided to do a go-around. Why did he do that, due to what technical reason, that we will find out,” he said, before hopping on a plane to Karachi.

CAA sources said that its communication was cut off with the plane a minute before it was supposed to land. According to the audio, shared widely on social media, the pilot can be heard saying “we have lost engine” as he puts out a may day alert.

According to the mayday alert, shared widely on social media, the pilot can be heard saying “we have lost engine” as he puts out a may day alert.

Last Radio conv. of PK8303
"We have lost the engine." #planecrash pic.twitter.com/4nolMdFiMY

The PIA spokesperson confirmed there were “technical issues” in a video message. He said that the pilot was told he has two runways available for landing but “chose to do a go around” for unknown reasons.

Troops form the Pakistan Army’s Quick Reaction Force and Pakistan Rangers Sindh arrived at the crash site shortly after to assist the civil administration in relief and rescue efforts.

An army medical corps team has reached the site with ambulances. Only registered workers and army teams are allowed to enter the cordoned off area. No residents are being allowed as the site has to be examined forensically as well. The service road leading to the lanes has also been sealed.

Rescue people say it will take 24 to 48 hours to complete the operation. Fifteen houses have been damaged. A wall had to be broken to remove the bodies.

Several houses were damaged in the area where the plane crashed. 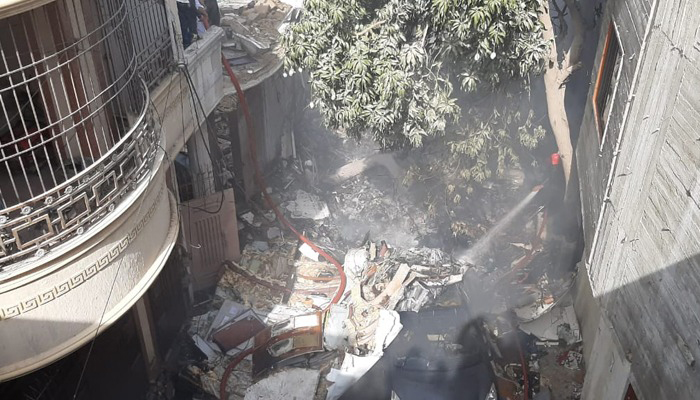 Ambulances were faced with difficulty as the streets were quite narrow and the huge presence of people made it difficult for relief operations to continue.

PIA spokesperson Abdullah Hafeez said that said that the airline was receiving information in real time. He said that Air Marshal Arshad Malik was reaching Karachi in two hours to assess the situation.

He said that it was premature to point out any technical fault in the plane and an independent institution will carry out an investigation to ascertain the cause of the crash.

Hafeez said that the PIA would hold a detailed press conference to share the details of the crash soon.

Rescue sources said that 15-20 persons have been helped out from under the rubble. Eight persons have been injured and shifted to a hospital for medical treatment. The body of a 5-year-old and another person was recovered from the site. “Due to the rush, we are encountering difficulties in carrying out relief operations,” said SSP Malir. “People should avoid gathering at the accident site,” he added.

Senior journalist Ansar Naqvi, who used to work for The News and was currently working for Channel 24 as its Director Programming, also died in the crash.

Chief of Army Staff General Qamar Javed Bajwa condoled over the loss of lives in the plane crash. The army chief directed the provision of full assistance to the civil administration in rescue and relief efforts.

The PIA has released a passenger manifest according to which 51 men, 31 women and nine children were aboard the PK-8303 flight.

The CM Sindh directed the police chief and the commissioner Karachi to ensure all possible assistance at the crash site.

Following is the list of all passengers on the ill-fated flight: 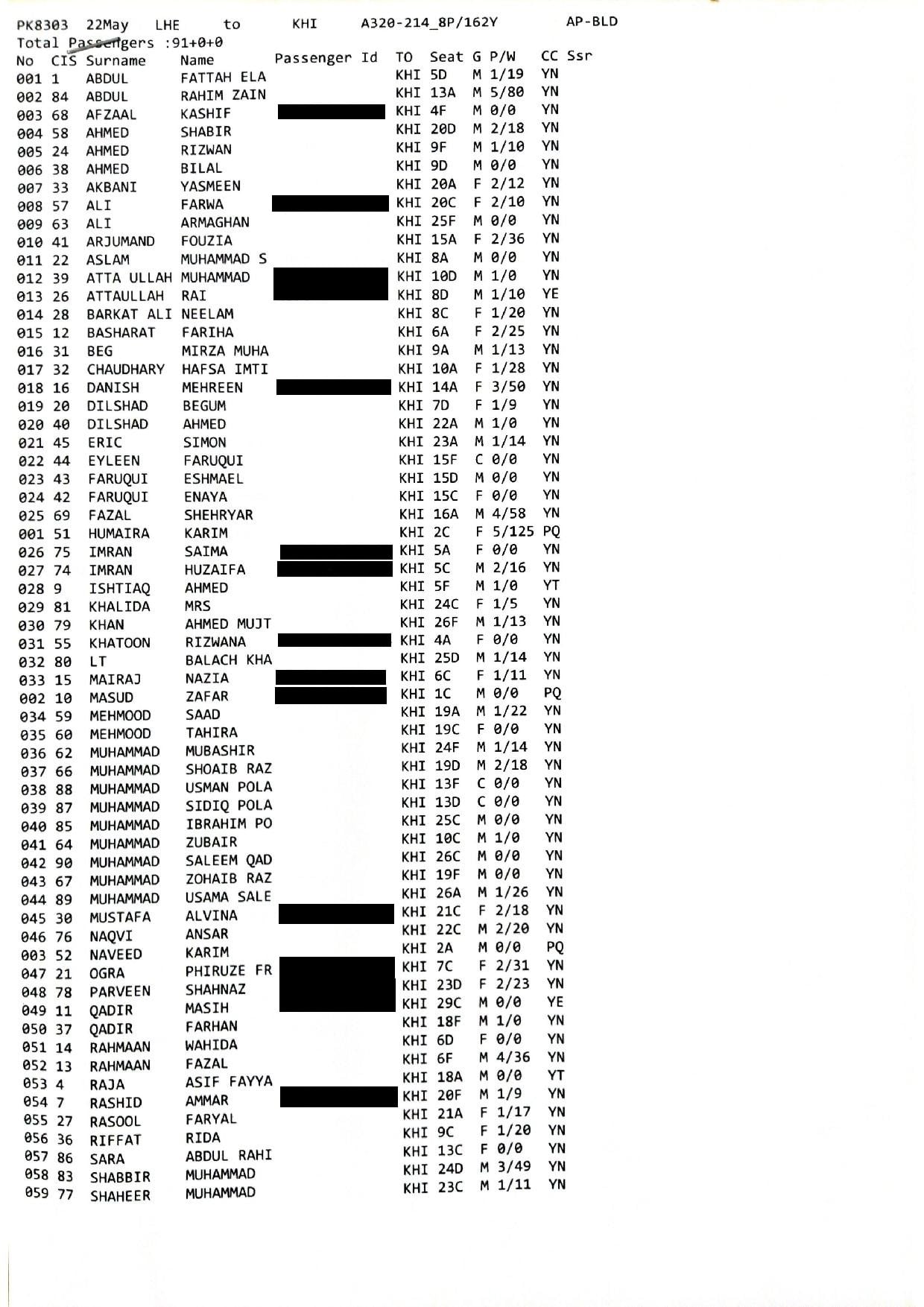 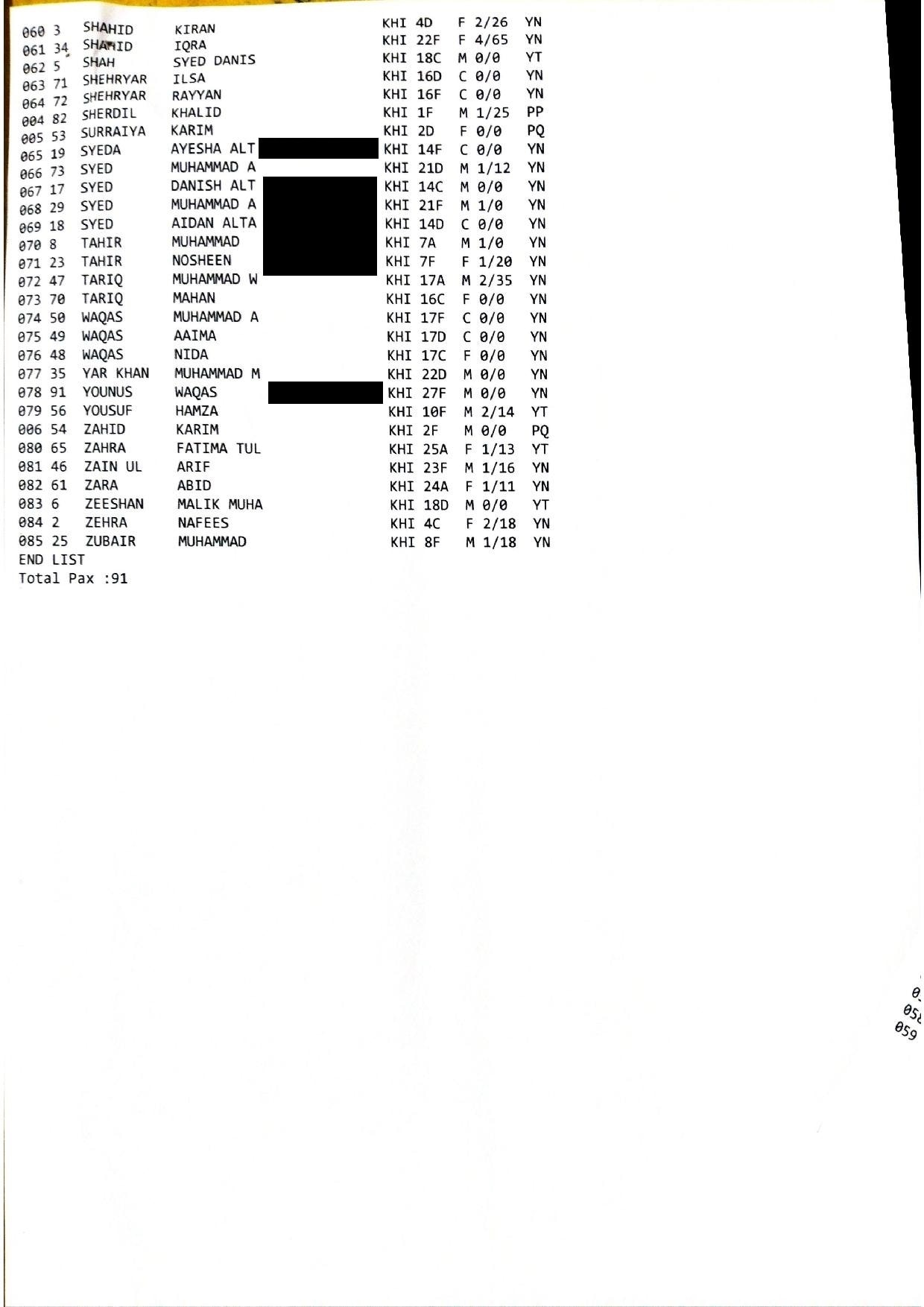 ‘Pilot said it was a technical fault’

PIA CEO Air Marshal Arshad Malik said that the pilot, in his last words, had said that there was a technical fault with the aircraft. “The pilot was told that both runways were ready for him to land. However, the pilot decided to do a go-around. Why did he do that, due to what technical reason, that we will find out,” he said, before hopping on a plane to Karachi.

Condolences pour in on twitter from PM, other prominent personalities

Prominent personalities including Prime Minister Imran Khan took to Twitter to react to the plane crash tragedy, offering condolences over the loss of lives in the incident.

Shocked & saddened by the PIA crash. Am in touch with PIA CEO Arshad Malik, who has left for Karachi & with the rescue & relief teams on ground as this is the priority right now. Immediate inquiry will be instituted. Prayers & condolences go to families of the deceased.

Deeply grieved over devastating plane crash in res area flying to Khi & mins away from landing with many making way home for Eid. Terrible tragedy, my prayers with all families. We are in midst of grave challenges as a nation & in these times of trial we must show resolve & unity

This is a developing story and will be updated accordingly.