KARACHI: Police said all four ‘terrorists’ who attacked the busy Pakistan Stock Exchange (PSX) around 10am on Monday morning had been killed by security personnel, with two security guards and a police sub-inspector martyred while repelling the attempt to storm the busiest building on Karachi’s I.I. Chundrigar Road, also known as Pakistan’s Wall Street.

Armed militants had arrived at the PSX compound in a sedan and attempted to enter it from the parking ground side, according to initial reports and eyewitness statements. They were seen shouldering backpacks and carrying automatic weaponry in an amateur video captured by an eyewitness. The equipment, arms and ammunition recovered from them indicated that they had come prepared for a long siege. 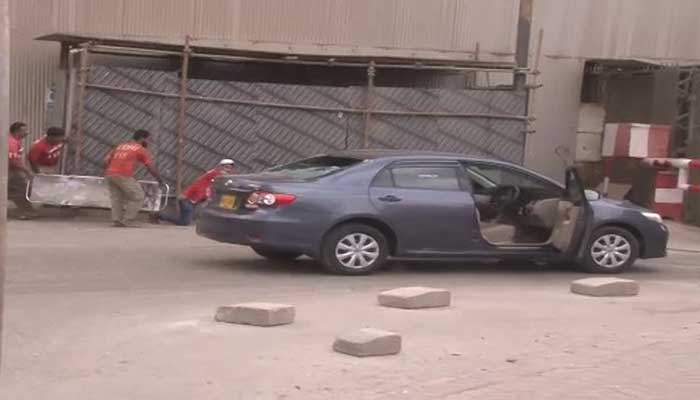 After failing to enter the compound, the militants launched a gun and grenade attack and attempted to storm the building while opening indiscriminate fire. They were engaged by security personnel posted and failed to make headway amidst heavy exchange of fire.

Initial reports indicate that all four of the militants were killed near the entrance gates, before they could enter the building. Four security guards and a police sub-inspector laid down their lives foiling the attack.

The entire locality was later cordoned off by security forces and a search and clear operation was launched. The PSX was evacuated and the car that the militants arrived in was taken into custody. 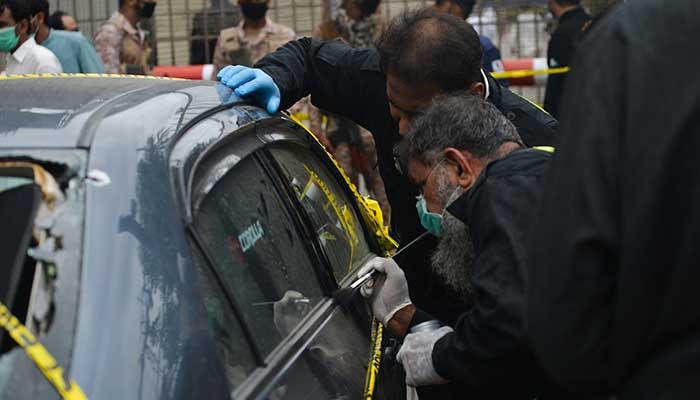 SP City Muqadas said seven people wounded in the attack had been shifted to Civil Hospital Karachi. He added, apart from those martyred, a policeman injured in the incident was being treated at the hospital.

Director Pakistan Stock Exchange and an eyewitness to the attack, Abid Ali Habib, said that the militants had stormed the Railway Ground parking area and fired outside the ground of the PSX. Habib said that the firing by militants had caused panic among the people in the building.

Major-General Omer Ahmed Bokhari while addressing a press conference in Karachi said the four militants came to the PSX intending to enter the building and not only do violence but also hold people hostage.

“Every terrorist was armed with weapons that include Ak-47s, hand grenades, rocket launchers, food and water etc,” he said.

Speaking about the entire operation, Major-General Bokhari said the four attackers were killed in eight minutes. “Two attackers were gunned down at the first entrance,” he said.

“It was a combined effort with rangers, police and PSX security guards,” he said adding, the entire building was cleared within 25 minutes so that the routine activity of the Pakistan Stock Exchange was not affected.

Clearing the air about who was responsible for the attack, the DG said they were investigating the attack. “We will find out what gaps were present due to which these militants came through and investigate them,” he added.

He continued, “The PSX is an important symbol of economic activity hence the objective of these militants must have been to increase casualties here or hold hostages.”

“It was an attempt to send a message to the world that Pakistan is not safe. They wanted to downgrade Pakistan’s economic activity and harm investors’ confidence,” DG Rangers noted.

He added, “I can guarantee you that this terrorist attack could not have taken place without a ‘hostile terrorist agency’ and number one on the list is RAW.”

The Maj-Gen further said the authorities will probe thoroughly into the attack.

“Pakistan’s law enforcement agencies (LEAs) in the past few years have taken action against criminal gangs and terrorist organisations, shrinking their space. Hence, this has frustrated hostile agencies,” he said. “We are fully aware that hostile agencies are struggling to form a nexus of remnants of some terrorist organisations such as MQM-London and sub-nationalists.”

He added, “We are aware of who is doing what and forming which nexuses. You will see, we will reach to the depth of this and shrink their [militants] space further.”

Responding to question, DG Rangers Sindh said that it is easy to call everything an intelligence failure. “Karachi is a large city and it isn’t as easy as four people sitting in a car and carrying out militant activities anywhere,” he said.

People should appreciate how these four terrorists had been eliminated within eight minutes, he said. “Our response was in place and they could not fulfill any of their objectives,” he added.

The Pakistan Stock exchange has also confirmed that the firing has stopped and the reinforcements are in place.

“There was an attack on the PSX compound earlier today. The situation is still unfolding and management, with the help of security forces, is managing the security and controlling the situation,” said the PSX in a tweet.

There was an attack on the PSX compound earlier today. The situation is still unfolding and management, with the help of security forces, is managing the security and controlling the situation.

We will issue a more detailed statement in due course once the situation is under control and more details are known.
For now firing has stopped and reinforcement are in place.

The PSX shared that they will issue a more detailed statement once the “details are known”.

“For now firing has stopped and reinforcement are in place,” said the PSX.

Meanwhile, Managing Director of PSX Farrukh Khan told Geo News that the incident was “very unfortunate” but thankfully the PSX’s security arrangements and planning done by them was “effective” in thwarting the attack.

Khan said that the PSX’s guards were successful in stopping the attackers from entering the building till police and rangers responded to the incident.

The MD PSX also shared that the staff at the building was less than normal due to the coronavirus pandemic as many people were working remotely.

“I cannot give an exact figure [on how many people were in the building] but the Stock exchange compound has two main areas. One is the PSX building and has its staff due to COVID-19 were working remotely as far as possible. Staff was there but it was less than normal,” said the MD. He added that on normal days 6,000 to 8,000 people entered the compound but it was very less these days due to the COVID-19 pandemic.

But Khan repeated that even despite the pandemic there were a lot of people inside the compound, adding that if the terrorists were not held back at the gate then the situation could have turned worse.

The MD also shared that one of the attackers came inside the compound for some steps but he was neutralised before he could come further by the PSX’s security team and security personnel.

Khan also shared that trading was not affected by the attack and continued even during the attack and was still underway. He also clarified that the PSX had not received any kind of threat about an imminent attack.

Prime Minister Imran Khan has also condemned the attack at the Pakistan Stock Exchange and lauded the security agencies for bravely fighting the attackers and successfully thwarting their attack.

The PM also shared his condolences with the deceased and prayed for the successful recovery for the injured.

Chief Minister Sindh Murad Ali Shah has condemned the incident and asked for a detailed report of the incident.

Shah said that enemies of the country want to take advantage of the situation created by the pandemic and directed all law enforcement agencies to be more vigilant. The CM also lauded the police and rangers for the quick action.

On the other hand, Governer Sindh Imran Ismail, while the attack was ongoing, had tweeted that he had instructed the Inspector General of police and security agencies to catch the militants alive.

“We shall protect Sindh at all costs,” the governor had tweeted while condemning the attack.