ISLAMABAD: Prime Minister Imran Khan on Saturday said he feared a massacre similar to the 1995 genocide in Srebrenica could happen in Indian occupied Kashmir and urged the international community to take notice and prevent it from happening.

Speaking on the 25th anniversary of the massacre, the premier said he still remembered when the genocide had taken place.

“We were shocked and appalled how this massacre was allowed to happen in a United Nations safe haven. I still feel shock [over] how such a thing could have been allowed by the world community.”

In 1995, at least 8,000 mostly Muslim men and boys were chased through woods in and around Srebrenica by Serb troops in what is considered the worst carnage of civilians in Europe since World War II. The slaughter has been confirmed as an act of genocide.

Khan said it was important to learn lessons from the massacre and talked about apprehensions regarding occupied Kashmir.

He urged the world community to take notice and never allow such massacres to happen again.

Echoing remarks made by the prime minister, Foreign Minister Shah Mahmood Qureshi said that the world had a “collective responsibility to ensure that history is not repeated”.

In a tweet, Qureshi said that what was happening in occupied Kashmir and Palestine was “chillingly similar” to the 1995 massacre.

July 2020 marks 25 years since the #Srebrenica Massacre, the murder of over 8000 Bosnian Muslims & ethnic cleansing of over 20'000 people. The world has a collective responsibility to ensure history is not repeated. What is happening in #IOJK and #Palestine is chillingly similar.

The Bosnian war, which started in 1992, pitted the country’s three main ethnic factions — Serbs, Croats and Bosnian Muslims — against each other after the break-up of Yugoslavia. More than 100,000 people were killed in the conflict before a peace deal was brokered in 1995.

What took place in Srebrenica was a mark of shame for the international community as the town had been declared a UN “safe haven” for civilians in 1993.

When Bosnian Serb forces broke through two years later, about 15,000 Bosnian Muslim men and boys fled into the woods. And twice as many terrified residents rushed to the UN compound in what was formerly an industrial zone at the entrance to town, in the hope that Dutch UN peacekeepers would protect them. 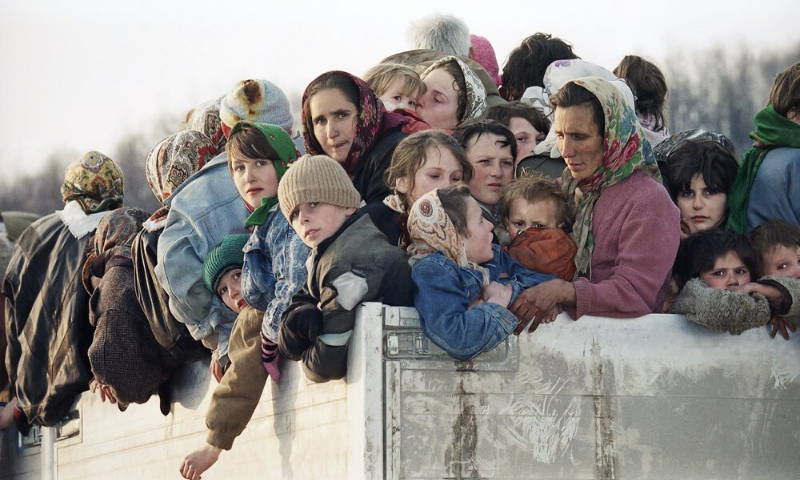 However, the outgunned peacekeepers watched helplessly as Serb troops took around 2,000 men and boys from the compound for execution while bussing the women and girls to Bosnian government-held territory. Meanwhile, in the woods around Srebrenica, Serb soldiers hunted the fleeing Bosniaks, as Bosnian Muslims are otherwise known, killing them one by one.

The killers sought to hide evidence of the genocide, piling most of the bodies into hastily made mass graves, which they subsequently dug up with bulldozers and scattered the bodies across numerous burial sites.

In the years since, bodies have been unearthed and the victims identified through DNA testing. About 1,000 victims remain to be found.

A special UN war crimes tribunal in The Hague and courts in the Balkans have sentenced close to 50 Bosnian Serbs, including their top civilian war-time leader, Radovan Karadzic, and his military commander, Ratko Mladic, to more than 700 years in prison for Srebrenica crimes.

Pakistan on Friday called on the United Nations to continue monitoring and documenting human rights abuses being committed by India in occupied Kashmir.

“Pakistan reiterates its call for enhanced international monitoring of and continued UN reporting on the human rights crisis in Indian Occupied Jammu and Kashmir to save lives, dignity and freedoms of the Kashmiri people under illegal occupation for over seven decades,” the Foreign Office said in a statement.

The occupied valley has seen at least 229 killings during more than 100 military operations since January, according to a recently released report by the Jammu and Kashmir Coalition of Civil Society (JKCCS).

From January 1 to June 30, the region witnessed the extrajudicial executions of at least 32 civilians and the killing of 54 armed forces personnel, the report stated.

It also saw 55 internet shutdowns and the destruction of 48 structures.

The report said three children and two women were also killed, while at least “107 cordon and search operations and cordon and destroy operations were conducted in the region”.

The Indian government had on August 5, 2019 repealed Article 370 of its constitution, stripping occupied Kashmir of its special status. It also divided up occupied Jammu and Kashmir into two union territories; one Jammu and Kashmir, and the other the Buddhist-dominated high altitude region of Ladakh. The bifurcation of the territory came into effect on October 31 last year.

A strict lockdown and communications blackout has been in place in occupied Kashmir since August last year, with reports suggesting limited mobile data services and internet were temporarily restored in the region in January.