Quetta Gladiators battle Multan Sultans in a race to playoffs

The 25th match of the Pakistan Super League (PSL) 2020 between Quetta Gladiators and Multan Sultans could be affected due to intermittent rains in Lahore.

According to Pakistan Meteorological Department (Met Office), the rain is expected to intensify in Lahore in the evening, which means that the fixture could be affected.

“Strong winds, rain and thunderstorm are expected in all districts of Punjab from Wednesday to Friday,” a statement on the Met Office’s website read.

The pitch has been put under covers, while the ground staff is busy cleaning up the enclosures. 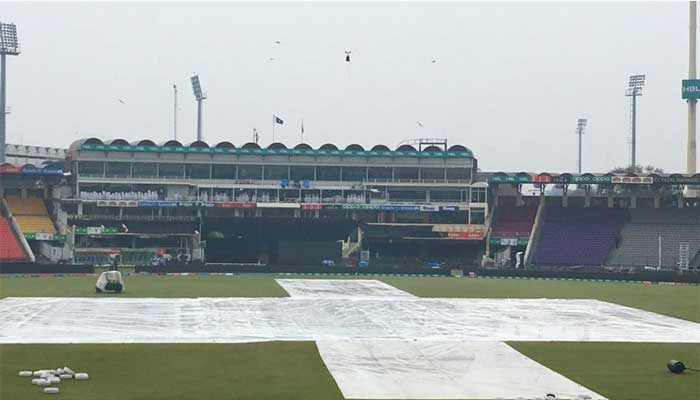 It is pertinent to mention that bad weather and wet outfield has so far completely scrapped one match and affected several others during PSL 2020.

With the noose tightening around them, Quetta Gladiators face Multan Sultans in their Pakistan Super League match at Lahore’s Gaddafi Stadium tonight.

Gladiators whose performance has been below the belt this tournament sit at the bottom of the points table with six points from eight matches.

On the other hands, Sultans who only made their debut two editions ago, lead the points table with 11 points from seven games. The Sultans have won five games, lost only one while one of their game produced no result.

The last time the two teams faced each other in the tournament, Rilee Rossouw ran riot scoring a 44-ball century to take Sultans to the top of the table.

Sultans will once again be relying on Rossouw along with skipper Shan Masood who has been hitting it out of the park for Multan.

Imran Tahir has been impressive in the bowling department having picked up 10 wickets with veteran Sohail Tanvir picking seven wickets so far.

Quetta, led by Sarfaraz Ahmed have another strong squad with the likes of Shane Watson who has scored 181 runs this season and Jason Roy who is the top scorer for the Gladiators with 233 runs from eight games.

Teenage pacer Mohammad Hasnain is leading the bowling charts with 14 wickets from eight games with a best of 4-25.

With only two matches left in the league stage including this one, the Gladiators will have to make sure they win both to make it to the playoffs.

The match between Quetta Gladiators and Multan Sultans will begin at 7pm.