Death of a pacifist

Pakistan and the world at large sits at another crossroads, what is a decisive chapter in history for many and may very well be a decisive chapter in the history of time given the nuclear capability of the states involved, the stakes on the line and the potential of the conflict spilling over.

We sit on a precipice which people of the sub-continent have been told about since seven plus decades, something we either conveniently shoved under the carpet, laughed at and mocked, couldn’t digest, ignored or prayed for never to happen, but it’s here and my humble apologies to those that expected more theatrical an ambiance.

Our Prime Minister, Imran Ahmed Khan Niazi walked into Azad Jammu and Kashmir where he addressed their legislative assembly on the Indian designs to embroil the region into more chaos and anarchy to further it’s ideological agenda of Hindutva which he juxtaposed with the Nazi ideology of Adolf Hitler, built on racial superiority.

When the current Prime Minister of AJ&K boldly and brazenly forewarned those in attendance directing Prime Minister of Pakistan’s attention towards him and said: “What is being done now in Indian occupied Kashmir will eventually make its way to Pakistan,” the premier of Pakistan rebutted that he was a pacifist and did not believe in war, claiming that it was also what his religion taught him.

Pacifism is opposition to war, militarism, or violence. The word pacifism was coined by the French peace campaigner Émile Arnaud (1864–1921) and adopted by other peace activists at the tenth Universal Peace Congress in Glasgow in 1901. A related term is ahimsa (to do no harm), which is a core philosophy in Hinduism, Buddhism, and Jainism. While modern connotations are recent, having been explicated since the 19th century, ancient references abound.

Pacifism covers a spectrum of views, including the belief that international disputes can and should be peacefully resolved, calls for the abolition of the institutions of the military and war, opposition to any organization of society through governmental force (anarchist or libertarian pacifism), rejection of the use of physical violence to obtain political, economic or social goals, the obliteration of force, and opposition to violence under any circumstance, even defence of self and others. Historians of pacifism Peter Brock and Thomas Paul Socknat define pacifism “in the sense generally accepted in English-speaking areas” as “an unconditional rejection of all forms of warfare”.

Sometime after 5 PM, according to witnesses, Gandhi had reached the top of the steps leading to the raised lawn behind Birla House where he had been conducting multi-faith prayer meetings every evening. As Gandhi began to walk toward the dais, Godse stepped out from the crowd flanking Gandhi’s path, and fired three bullets into Gandhi’s chest and abdomen at point-blank range. Gandhi fell to the ground. He was carried back to his room in Birla House from which a representative emerged sometime later to announce his death.

Godse was captured by members of the crowd and handed over to the police. The Gandhi murder trial opened in May 1948 in Delhi’s historic Red Fort, with Godse the main defendant, and his collaborator Narayan Apte and six others as the co-defendants. The trial was rushed through, the haste sometimes attributed to the home minister Vallabhbhai Patel’s desire “to avoid scrutiny for the failure to prevent the assassination.”

Mahatma Gandhi was assassinated on 30 January 1948 in the compound of Birla House (now Gandhi Smriti), a large mansion in New Delhi. His assassin was Nathuram Godse, an advocate of Hindu nationalism, a member of the political party the Hindu Mahasabha, and a past member of the Hindu nationalist paramilitary volunteer organization Rashtriya Swayamsevak Sangh (RSS).

“All India Muslim League” was formed in 1906, at the residence of a Kashmiri of Bengal, Sir Salimullah Khan. Above all, the greatest Philosopher, poet and Scholar Dr. Allama Muhammad Iqbal, a Kashmiri himself, initially sponsored the idea of a separate homeland for the Muslims of Sub-continent in 1930. He also made it clear that, the dream of Muslim India would be incomplete without the freedom of the Islamic State of Kashmir. In a way, it was the formal announcement of Kashmir as an inalienable part of the new ideological Muslim State in Sub-continent, Pakistan.

The region comprising this new state shared natural, logistical, economic, cultural, religious as well as historic ties with Jammu and Kashmir. The overwhelming majority of Kashmir at the time, according to some studies over 80 per cent, was Muslim. The masses believed it was their democratic right to become part of Pakistan. However there was a catch.

According to the Independence Plan the Indo-Pak region was divided on the basis of religious majority of Muslims and Hindus but the independent princely states were to decide their own fate taking into account geographical contiguity and the wishes of their people. Any and all disputes were to be resolved by holding plebiscites.

The subjugation and internal rifts among Kashmiris ultimately led to a revolt in the Poonch region against the “Dogra Raj” resulting in declaration of “Azad” Kashmir government. The cries for support against the ruthless Dogra oppressors were answered by the poorly armed Pashtun tribes from the mountainous terrains of Pakistan, sharing a strong bond of religion. As a result Hari Singh asked for help from India and was forced to sign an alleged accession document as per Indian claims despite having already signed a “standstill” agreement with Pakistan.

The Jinnah–Mountbatten Talks were bilateral talks held in Lahore between the Governor-Generals Muhammad Ali Jinnah and Louis Mountbatten of Pakistan and India, to address the Kashmir dispute. The talks were held on 1 November 1947, five days after India dispatched its troops to defend Kashmir against a Pakistan-backed tribal invasion. In the talks, Mountbatten presented India’s offer to hold an impartial plebiscite under the United Nations auspices to decide the accession of Kashmir. Jinnah effectively rejected the offer. 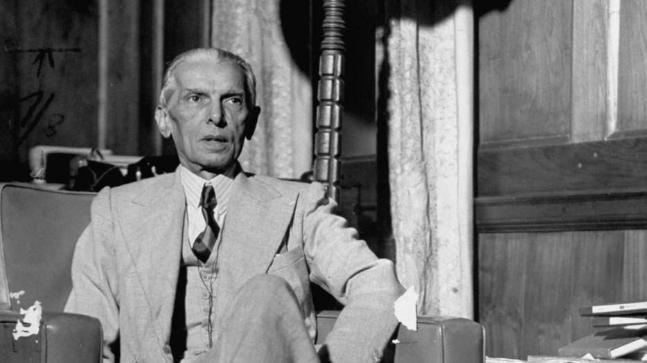 Worried by Indian aggression, Quaid-e-Azam ordered the British commander-in-chief of Pakistan army, General Gracey to send in army units to aid Kashmiris but he refused to take direct orders of the governor general. A few low-ranking Pakistan army officers voluntarily joined the warring tribes and reached the outskirts of Srinagar. However unnecessary changes of command, lack of proper arms and ammunition’s and deficiency in numbers of the rag-tag militiamen meant they were no match materially for the regular Indian army. However their passion, skill and bravery with which they fought with led them to not only liberate a vast region but inflict such damage that the Indian Prime Minister Jawaharlal Nehru himself took the matter to the United Nations (UN), requesting a cease-fire and asking for a plebiscite in Kashmir under the UN watch, accepting it to be a disputed territory.

Pakistan’s Independence Day logo with the text ‘Kashmir Banay Ga Pakistan’ (Kashmir would become Pakistan) emblazoned on front and center with the constant reiteration of Pakistan’s federal government of not taking the war to India on the apparent miscarriage of justice and human rights violations in the illegally occupied valley, reeks of nothing but hypocrisy and bigotry of the highest order.

In the first joint session of the National Assembly with the entire political brass of the Pakistan present, the Prime Minister Imran Khan got up out of his seat after an impassioned speech by the leader of the opposition in the assembly and visibly distraught and bamboozled, blurted out, “what do you want me to do? Do you want me to wage a war against India?”

A hush fell over the buzzing assembly and no one said anything for what felt like an eternity and then the leader of the opposition Shehbaz Sharif retorted that whatever the government does would solely be its responsibility, implying that the opposition will not bear the onus, share the burden or stand alongside the federation in these trying times, which they then proved in the days to follow with their conduct in the following assembly sessions and media appearances, hogging the spotlight for more politicking and petty squabbles as their leadership goes through the pincer of monetary corruption investigations.

Time and again since the brutal clampdown on the innocent people of Indian Kashmir started, the Pakistani Prime Minister has made his fears clear and called for the western world and the powers that be to take note but with little to no return, the Muslim nations in the world have also conveniently decided to remain quiet thus far with meek statements of condemnation, whereas Turkey remained the only Muslim country to express full support to the Kashmiri plight and pledged to stand in support of Pakistan and their decisions on the matter.

Imran Khan says, the war would be initiated and then be answered for, my question remains has it not yet been initiated or are we considering the Line of Control to be an actual state limit whilst considering the disputed territory of Kashmir to be a part of India?

Khan says he would answer when Pakistan’s borders are breached, so have they not been breached thus far? Then why the superfluous chanting of ‘Kashmir Banay Ga Pakistan’ and celebration of Kashmir Solidarity Day?

If we have effectively dumped the disputed area of Kashmir then the nation deserves to know about the great betrayal, if not then the nation is watching your thinly veiled cowardice in the garb of Islam.

I am not the one to build a case and offer no solutions, this is what separates me from the anarchists, I have solutions which require bravado, intestinal fortitude and vision.

If wise then pay heed, if not then be ready to take heavy losses when the imminent war crosses the LoC.

We are all aware of the country’s crippled economy, but if a war is being imposed then what do you do, tell the aggressor that you are too poor to fight or fight with whatever you’ve got, bet the pacifist would turn the other cheek.

But Islam in not about pacifism, it’s about doing the right thing, the just thing, the honorable thing, when innocents die under your eye and God has blessed you with the means and resources to make a difference and yet you choose to remain silent in the face of blatant oppression then rest assured, your fate will be worst than those who you abandon.

We must initiate a short limited war against India, keeping it inside the confines of the Indian Occupied land, support insurgencies, build a diplomatic front, be pro-active rather than re-active, stop the flames from getting inside our home and put out the fire in the alleyway when we have the chance.

An emergency United Nations Security Council moot has been called with a one point agenda, ‘Kashmir’.

Hope we know what case to put forth, how to put it forward and what to demand, if the meeting is spared from one of the heavyweights on the ‘big table’ from vetoing the proceedings, then we may peg a few hopes, but to me, I have no high expectations and could see Pakistan attending with a ‘deer in the headlights’ expression.

Not being a pessimist, just a realist, if the world is not bothered and taking note, then you make them, by any means necessary, but then again, pacifism rather smoke a joint and throw up a peace sign.