Social distancing rules should be same for Ramazan as for Easter: Trump

US President Donald Trump said on Saturday that he hopes US Muslims will be held to the same social distancing standards during Ramazan as Christians at Easter, when a number of faithful chafed against coronavirus-related restrictions on large gatherings.

The US president made the comments after being asked to defend a retweet of a conservative commentator who seemed to question whether Muslims would be treated with the same severity as Christians who broke social distancing rules.

“I would say that there could be a difference,” Trump said during his daily coronavirus press conference. “And we’ll have to see what will happen. Because I’ve seen a great disparity in this country. They go after Christian churches but they don’t tend to go after mosques.”

Trump manages to push an Islamophobic trope during the #coronavirus epidemic, suggesting Muslims get preferential treatment of some sort on religious gatherings. When he was challenged on it, he pivoted to Israel & the squad. This clown has no business being president! pic.twitter.com/AeAo11tetD

“The Christian faith is treated much differently than it was,” Trump added. “And I think it’s treated very unfairly. “

Ramazan falls a week and a half after Easter, when some Christians bucked public health regulations to attend illicit services.

Asked whether he thought imams would refuse to follow social distancing orders, Trump responded: “No, I don’t think that at all.”

“I am somebody that believes in faith. And it matters not what your faith is. But our politicians seem to treat different faiths very differently.”

Trump has been accused of anti-Muslim rhetoric in the past and one of his first acts upon entering office was to ban travellers from several Muslim-majority countries.

More than 700,000 cases of coronavirus have been reported in the United States, forcing religious communities across the country to shutter their doors.

The Islamic Society of North America, alongside Muslim medical experts, has urged the suspension of group prayers, among other gatherings. Jewish Americans were likewise forced to turn traditional Passover seders into virtual affairs when the eight-day holiday began at sundown on April 8.

Despite similar measures taken across much of the Christian community, a Virginia pastor who continued to preach in defiance of stay-at-home rules died a week ago of coronavirus. And pastors at two megachurches in Florida and Louisiana have been arrested on misdemeanour charges for flouting stay-at-home orders.

Protests erupt in US

Hundreds, meanwhile, protested Saturday in cities across America against coronavirus-related lockdowns — with encouragement from President Trump — as resentment grows against the crippling economic cost of confinement.

An estimated 400 people gathered under a cold rain in Concord, New Hampshire — many on foot while others remained in their cars — to send a message that extended quarantines were not necessary in a state with relatively few confirmed cases of Covid-19. 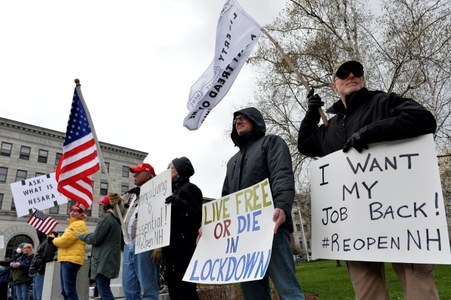 In Texas, more than 250 people rallied outside the State Capitol in Austin, including far-right conspiracy theorist Alex Jones, founder of the Infowars site, who rolled up in a tank-like truck.

Most Americans — by a two-to-one margin — actually worry about virus restrictions being lifted too soon, not too late, a recent Pew survey found.

But demonstrators found encouragement Friday from the president, who in a series of tweets called to “LIBERATE” Michigan, Minnesota and Virginia — all states with Democratic governors — from stay-at-home orders.

LIBERATE VIRGINIA, and save your great 2nd Amendment. It is under siege!

Trump has repeatedly called for the earliest possible return to normality as virus-related closings have had a crushing impact on American workers and businesses.

“I really think some of the governors have gotten carried away,” Trump said at a White House news conference on Saturday.